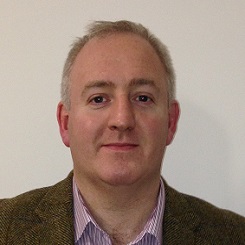 Sean studied at The University of Aberdeen and trained in trauma and orthopaedic surgery in the North of Scotland. He undertook fellowships in Edinburgh, Newcastle and Kurgan, before initially being appointed to a Consultant post in Aberdeen. He subsequently returned to Northern Ireland to take up post in Craigavon Area Hospital, where his practice involves primary arthroplasty of the hip and knee and soft tissue knee surgery. Having moved away from the North-east of Scotland, he has also moved away from the Stracathro approach to the hip! Although he still has a keen interest in Speyside Whisky’s